I found a copy of my favorite book as a baby (according to my mom): Look! A Parade by Marjorie Barrows. It tells the story of a circus parade led by a marching band with clowns, monkeys, dogs, an elephant, a camel, and even a smiling tiger in a cage. 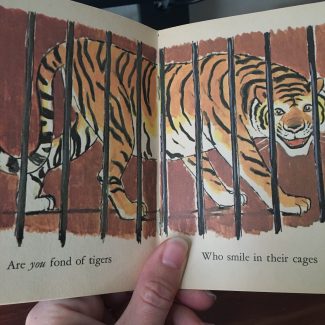 All the action leads up to the final lines set outside the big-top tent: “It’s coming! It’s coming! THE CIRCUS HAS COME!”

I know why this was my favorite book as an baby. My family is all about parades. One of my earliest memories is the town Halloween parade—hiding behind my mom and waiting for the people in terrifying gorilla masks to pass by. A few years later, I rode in that same annual parade with my Brownie troop, waving and smiling from a firetruck. And in the last twenty years, I bet my dad has not missed a single Mascoutah Homecoming und Augustfest parade.

I’ve been thinking about parades as Christmas approaches because, to tell the story of Christmas efficiently, you turn it into a parade, or at least a solemn procession. Mary and Joseph proceed to Bethlehem with all the other folks who are going to be counted. Since there’s no room in the inn, they proceed to the manger. Then after Jesus is born, the main procession begins, with shepherds and wise men. 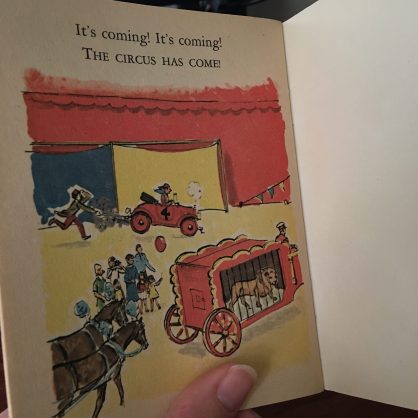 Years ago, I played a shepherd in my church’s March to the Manger. We strode efficiently down the center aisle: first the holy family, then a few animals, shepherds, an angel or two, and finally wise men carrying gilded boxes. It collapsed the narrative into a parade, and like my old book, it announced: He’s coming! He’s coming! THE MESSIAH HAS COME!

It served its purpose, offering an image of the people who came to worship the Baby Jesus–shepherds and wise men, angels and animals.

The diversity of creatures compelled to follow the star emphasizes the widespread persistence of God’s love for everybody.

Flannery O’Connor’s story “Revelation” paints a beautiful picture of this sort of unevenness with the main character’s epiphany:

“A visionary light settled in her eyes. She saw the streak as a vast swinging bridge extending upward from the earth through a field of living fire. Upon it a vast horde of souls were rumbling toward heaven . . .”

The procession she sees includes an assortment of people of all colors and “battalions of freaks and lunatics shouting and clapping and leaping like frogs.” People she’d never expect to enter heaven at all were entering before her.

In a culture that tends to pit wise men against shepherds and vice versa, I have to remember to join the parade—to look upon the baby who was born to liberate every one of us. We’re a ragtag parade of some shepherds and some wise men, saints, a host of angels and animals, and a horde of freaks and lunatics. All are welcome to march in this parade.