Last week I went to Nashville, Tennessee for a writing conference. I’d been to Nashville only once before—on a high school field trip—so I hardly know the place. I landed in the evening, rented a car at the airport, and drove to the hotel. Easy peasy. It wasn’t until the next day, trying to follow Siri’s directions during rush hour, that I realized I can’t see.

My glasses are nearly two years old, and I do just fine driving around familiar places where I don’t have to read highway signs. However, while approaching a fork in the road in exotic Nashville, it’s hard to know which lane to take if you can’t read the numbers inside the blob. Thankfully my rental car had Georgia plates because I was driving like a true out-of-towner.

After the conference, I made the drive from Belmont University to the airport during rush-hour traffic—arriving in one piece only by the grace of God and the mercy of strangers. May God bless the driver of the white Jeep Cherokee who let me merge from the random exit-only lane in which I was trapped, not realizing it was “exit only” until I was exiting.

Lent is again upon us. I’ve grown to appreciate the contemplative mood of Lent and its traditions. Last year, I studied the Seven Last Words from the Cross and wrote a short piece on them for each week of Lent. This year, I’m writing in the same general vein but thinking about my seven lasting words. By seven lasting words I mean persistent words, durable sayings that bounce around in my head, phrases that I say every day to myself or to God or to others.

The first of Jesus’ Seven Last Words is, “Father, forgive them, for they do not know what they do.” I was less magnanimous while white-knuckling it to the airport. Unlike the last words of sweet Jesus, my words were peppered with curses and pleas, the chief of which was, “Lord, have mercy.”

Straining to make out the overpass signs, squinting against the sun setting in my rear view mirror, I simply repeated, “Lord, have mercy.” And the Lord showed me mercy even as I muttered my favorite bad word. (It’s “shit.” Super versatile.)

God didn’t give me miraculous vision or send angels to carry me to the airport, but God’s mercy appeared in the gaps that opened amid bumper-to-bumper traffic so I could merge. God mercifully allowed me to miss important turns—twice—and still get to my gate in time to find a seat and work the USA Today crossword start to finish before boarding.

I learned that day what is meant by the phrase “traveling mercies.” I also made an appointment for an eye exam. Lord, continue to have mercy.

Thus, not mild, not temperate,

God’s love for the world. Vast

-Denise Levertov, from “To Live in the Mercy of God” from the collection Sands from the Well 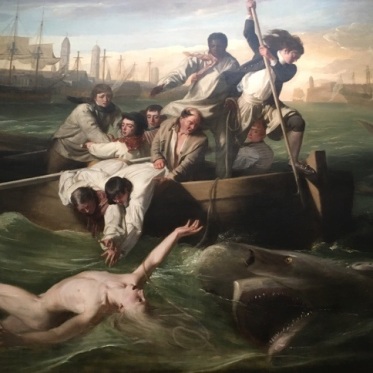 Watson and the Shark (1778) by American painter John Singleton Copley. I would have titled it Lord, Have Mercy.