When my daughter Caroline gets in a goofy, giggly mood, I see my younger sister Amanda in her. When we’re at my parents’ house, I sometimes slip and call her by my sister’s name.

Amanda and I are close in age, just a smidge less than two years. These days, she’s pretty serious and straightforward, but when we were kids, I’d do little things to make her laugh, and, once set off, she’d take a good while to return to sobriety after cackling, snorting, and falling out of her chair.

“Now, don’t get your sister wound up,” Mom might say. But it was already too late.

Similarly, when Caroline cracks up, long after we’re done laughing, she’s still carrying on, wiping tears from her eyes. Several times, I’ve mistakenly called her by my sister’s name when she gets super-silly. Something takes me back to third or fourth grade, and my daughter is suddenly my little sister.

We see Amanda often these days, which I love. But at times I treat my sister like a child, telling her how I would do things, offering opinions in order to put her out of the misery of indecision. To her, indecision isn’t miserable. And my two cents are worth just that.

And I’m not her mother.

Or is this garden-variety senility?

I remember my Aunt Ernie’s confusion in old age, calling me by my mom’s name in an otherwise lucid conversation. As she aged, she found it hard to keep the generations straight. At a certain point in adulthood, time doubles over on itself like one of those old, fold-up yardsticks.

It wasn’t that long ago I was tickling my little sister until she cried. But that was so many years ago. See, there’s the yardstick folding up.

Watch the hinges; they can pinch. 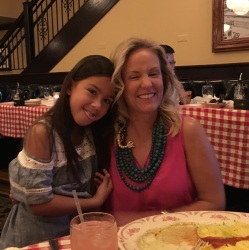 “If only my mother had known I was her sister instead of her daughter,” Terry Tempest Williams wrote, describing a new sense of kinship realized after her mother’s death. The things they shared in common made more sense in terms of sisterhood. I didn’t understand this sentence until I called Caroline by my sister’s name.

I couldn’t pass for my daughter’s sister; I was nearly thirty-three when I had her and she looks like her dad. But when I try to make her laugh until she spits out her drink or nag her when she doesn’t answer a question directly, at that point, time folds up and she is my little sister.

Maybe these brief flashes are about me wanting to make up for her not having siblings. Or maybe sisterhood is a type of relationship worth aspiring to, even for folks who are already otherwise related. Anyway, this I know: my daughter is blessed to have my sister who is like her in so many ways—and who loves her every which way.

Thanks for reading! Ever call your child by the wrong name? I’d love to hear from you. And if you have friends who might like this, please share it with them. Take care, Em : )