Last week we returned from a beautiful place in the Pacific Ocean where our neighbors now live. Hawaii has been on my to-see list since childhood, probably because my favorite sitcom families traveled there. George and Weezy Jefferson (and their neighbors Tom and Helen), the Mama’s Family bunch, and even Saved by the Bell had memorable Hawaiian vacations.

It’s a wonderful and strange place, the fiftieth state. Since it’s part of the US it feels familiar, but its remote location and tropical setting and strong native culture give it a foreign, glamorous quality. While there we visited Target and McDonald’s, which are pretty similar to those places in Illinois, except for the Spam items on McDonald’s menu—right next to the common Hotcakes & Sausage. The unfamiliar alongside the familiar.

Our hotel’s logo was a single arch—almost the shape of the St. Louis Arch—but with a peak at the top like a gothic window. Whenever I caught a glimpse of it from the corner of my eye, my brain would say, “What? A St. Louis Arch?” The mind works unbidden to find the familiar in the unfamiliar. 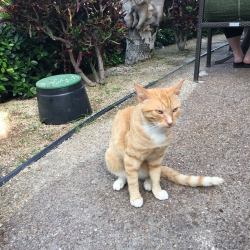 While we were away, my sister Amanda looked after Charlie-Cat. We knew he was well cared for but missed him still. When we spotted a cat that looked just like our Charlie at a restaurant, I bent down to meet him. He sneered at me, a common tourist. We named the kitty Charlie’s Evil Twin, alluring yet aloof, unsettling in his familiarity and unfamiliarity.

Of course, the highlight of the trip was hanging out with our old neighbors who now call Hawaii home. Meeting up with Kim and Brandon and the girls at a restaurant near the hotel felt as normal as hanging out in the front yard back in Illinois. We also got to see former neighbors Nick and Paula and their girls. (Why must our much-loved neighbors move to Hawaii?) It felt like old times, like chatting in the driveway, but on the beach in paradise on Memorial Day. It was a neighborhood reunion in the middle of the Pacific Ocean. Familiar folks in an unfamiliar place: in a word, it was lovely. 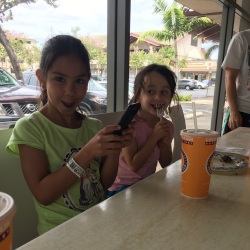 Toward the end of the trip, we stayed at Kim and Brandon’s house, Caroline playing with their girls and all of us enjoying their sweet hospitality. Caroline is a few years older than the girls—a sort of honorary big sister to them. And while we are not family, Kim and Brandon treated us as if we were, the familiar (literally) in the unfamiliar.

Part of traveling is finding ways to feel at home away from home—finding the familiar in the unfamiliar. And the dearest friends are the ones who’ve become somehow familiar—strangely familiar—like family. 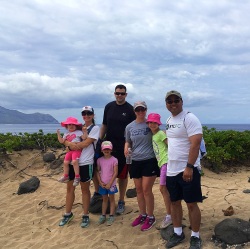