Earlier this June, some good friends invited us to meet up at the movies. It was part of the free summer movie series at the Lincoln Theater, so they kindly got there early and saved seats for Caroline and me. Good call on their part — the parking lot was packed and the theater was nearly full, too, with groups from kids’ summer camps, day care facilities, and day camps for people with special needs.  Lots of matching t-shirts.

I wasn’t that excited about the movie, but I was excited to catch up with Kelly and Abi after a couple weeks of summer vacation. The title of the movie was A Dog’s Way Home, and, to be honest, I thought the trailers would be the best part of the experience (especially with the sequel to Frozen coming out this fall).

The movie sounded like something I would tolerate more than like. When we were kids, my sister had The Incredible Journey on VHS. She nearly wore out the tape from watching it over and over. For me, the journey of two dogs and one cat was more stressful than incredible, with too many moments of animals in danger. I saw bits and pieces of it — it was unavoidable with only one TV in the house — but I’ve always found it risky to invest in an animal movie.

Anyway, as we watched the trailers before the movie, the crowd was already pretty lively. When Elsa appeared on the screen in the Frozen 2 trailer, I heard at least two little voices gasp, “Elsa!” Then the movie started, and I started to think of places where we could eat lunch with Kelly and Abi. Also, because the parking lot was full of buses and minivans, I’d parked in a semi-legal spot. A couple minutes into the movie, I was worrying about what kind of parking ticket awaited me.

Then the people sitting a couple rows back got invested in the stray puppy named Bella who was raised by kindly feral cats until the perfect man-boy rescued her. There was oohing at the cute puppy and awwwww’s at the motherly cats. The crowd was really into it. And so a movie that I might have dismissed as cheesy or sappy was getting to me.

The whole story bent toward the dog getting back home to her family. In all, the dog managed to travel from New Mexico to Denver, Colorado, with the help of other strays, benevolent humans, and a mountain lion kitten who’d lost her mother to hunters, reminding us that inter-species friendships may be the most heartwarming.

But the very best part was when Bella the dog, after many dangers, toils, and snares, found her way home. The audience burst into applause. Not polite applause but raucous clapping that came in waves, fervent applause with zero irony.

Eventually, after the applause died down to a few quiet sniffles, someone a couple rows away shouted tearfully, “She came home!” and, I kid you not, the applause started all over again, in waves, ebbing and flowing spontaneously through the dark theater.

It tickled me, this unabashed celebration, and I clapped and laughed at the wholehearted sweetness of it. The feeling of unity among the movie-goers was nearly tangible. We loved that dog, darn it, and we agreed one hundred percent that she would find her way home. 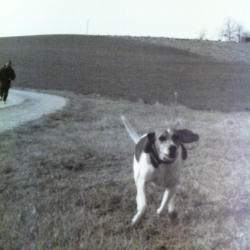