A few years ago, my husband Phil and I discovered the perfect special-occasion restaurant, a Brazilian steakhouse. The huge salad bar is my favorite, while Phil is fond of meat served from swords. I’ve always loved veggies, and the food we ate in Israel and Palestine included a mind-boggling variety of salads. Agriculture is an important industry there, cultivating not just amber waves of grain but a vegetable lover’s paradise.

The food we ate in the tourist restaurants and our American-friendly hotels was great: fresh, seasoned with oregano, marjoram, mint, parsley, olive oil, lemon juice, onion, garlic, and some other great flavors I couldn’t quite put my finger on. There were savory salads with tomatoes, carrots, beets, roasted cauliflower, or cucumbers or some combination thereof. There were sweeter salads with citrus fruit or something bright purple-pink (cabbage?) with apples, raisins, or walnuts.

Plenty of salad and plenty of bread—challah, pita, naan, and more.

Speaking of bread, at The Tent Restaurant in Bethlehem, they served wheat flatbread to be dipped in olive oil then dipped in a plate of dried herbs I had never heard of called za’atar. I loved this appetizer, as one of my favorite food groups is carbs dunked in fat with a touch of seasoning.

At another restaurant we had the choice of falafel or chicken shawarma. I chose falafel because of my chicken suspicion. It turns out falafel is not only fun to say but also fun to eat. It’s like chunky hummus shaped into a patty and fried.

Now, a moment dedicated to hummus. On the trip, I ate hummus politely, dipping it delicately with chunks of pita bread. Had I been alone, I’d have eaten it from a large bowl with a spoon, like lonely people eat ice cream. The hummus was, in a word, yummus.

In Jericho, the oldest city in the world, I bought a plastic container of dried fruit from a nice man who didn’t know much about his product.

“Well, it kinda looks like mango. I’ll take one, please.”

“Sí. Creo que sí, es mango.” Whatever it was, it was sweet and chewy like tasty, tangy orange shoe leather. I still haven’t figured out why he spoke Spanish to me.

Generally, I’m not adventurous with food. My brother-in-law Kenney once took us to a Malaysian restaurant where he ate fish head soup and fried chicken feet, while I nibbled on rice and tried to suppress my gag reflex. When Phil and I traveled to Europe, I felt secure knowing there was a Burger King nearby. Even so, one of the gratifying parts of meals in Israel was trying unfamiliar produce—from hot-pink salads to persimmon—and finding out they’re good.

In the poem “O Taste and See,” Denise Levertov writes of the “imagination’s tongue,” analogous to the mind’s eye or ear, but who else would have thought to phrase it that way?

“O taste and see / the subway Bible poster said, / meaning The Lord, meaning / if anything all that lives / to the imagination’s tongue, . . .”

And what does she include in her list of “all that lives to the imagination’s tongue”? “Grief, mercy, language, / tangerine, weather, . . .”

Fascinating that only one of these is edible. It makes sense, though: most of us have tasted sour grief surging under our tongues. We’ve tasted the flavors of language, from fun-to-say words like “falafel” to terms of apology that feel more like a ball of gristle.

I wonder, what does weather taste like? Maybe she means a mouth-watering desire for sunshine and warmth after a long, cold winter. With snow falling outside as I write this, I can almost taste warm weather, and it tastes like fresh pineapple.

I love how Levertov’s poem elaborates on the Psalmist’s “O taste and see that the Lord is good” and urges us to taste everything God has made.

At the Garden Tomb, we celebrated Communion with bread and grape juice. There was nothing remarkable in the flavor of these elements, and yet. And yet. 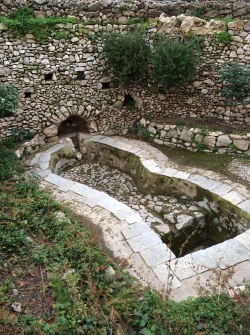 We sat quietly next to the ancient wine press, each of us holding a tiny olive-wood cup in our hands. Body and blood of Christ, broken and poured out for us. I stared in wonder as the wood’s rough grain absorbed the last lingering drop of juice.

Today I looked inside the little cup that sits on my desk. Not a stain of juice remains, not even a trace. Therein lies an image of the Good News. Exiled from the Garden, we live in the orchard. Far from perfect, it is nonetheless lush with God’s grace. And when we’re hungry, we can pluck the fruit and taste it and, seeing that it’s good, eat.

At one of the tourist buffets, I overheard a friend ask himself, “Is this potatoes or apples?” as he scooped some onto his plate. He’d have to taste them to find out. “O taste and see.”

God’s love is a juicy apple, but too often we Christians present it to the world like a raw potato. Just take it; it’s good for you. High in fiber. True, God is good, but God also tastes pretty sweet.

that the Lord is good.”

Truly, all the time.